In June 2020, Diplomatic History published an article co-written by Samuel J. Hirst and Onur İşçi, titled “Smokestacks and Pipelines: Russian-Turkish Economic Relations and the Persistence of Economic Development.” The photo below shows Aleksei Kosygin and Süleyman Demirel at the ceremonial opening of the massive Soviet-built steel factory in İskenderun in 1975. Despite the fact that Turkey was a NATO member, the Soviet Union offered extensive industrial aid – and the factories built with that aid looked like those the Soviet Union helped build in Egypt, India, etc. Hirst and İşçi argue that Turkey’s frustration with the West made it a site in the Global Cold War – the U.S.-Soviet struggle for influence in the Global South. They also push the chronological boundaries of the Global Cold War narrative and point to the Soviet and Turkish revolutionaries who buried a legacy of Russian-Ottoman conflict in the 1920s in the name of collaborative development and to echoes of the story today. 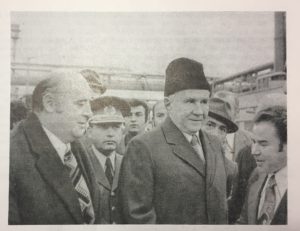