The perspective of the borderlands is one of the many approaches that can be applied to the study of Soviet-Turkish relations. Traditional histories of Cold War relations between the two countries usually emphasized the closed nature of the border between Eastern Anatolia and Soviet Caucasus, which embodied the spirit of the epoch until the late 1980s. Beyond that closed borders, however, border regions played a significant role in the evolution of bilateral relations during the later phase of the Cold War.

The role of the three South Caucasian republics of Georgia, Armenia and Azerbaijan was particularly important, as they could orient aspects of Soviet and Turkish diplomacy in the region. A recurrent irritant was restive Armenian collective memory, after the unauthorized demonstrations of 24 April 1965 in Yerevan, which reintroduced the issue of the Ottoman massacre of Armenians in the First World War, at a moment when the Soviets tried to mend off their relations with Turkey (1). Year after year, the commemoration of Armenian genocide caused headaches to communist leaders in Yerevan and Moscow.

Influences from Yerevan, however, ran counter to simultaneous trends in Azerbaijan, where relations with Turkey flourished in the 1960s after decades of taboo. Starting from 1963, when Senate speaker Suat Hayri Ürgüplü visited Baku, Turkish delegations in the USSR frequently stopped in Baku. This culminated in the highly propagandized visit of president Cevdet Sunay in November 1969, at a moment when Heydar Aliyev, former head of the Azerbaijani KGB, had just become first secretary of the republic. While Turkish influence could still be feared, Azerbaijan was to become a place for Soviet counter-propaganda and the instrumentalization of cultural proximity (2).

Ethnic Azeris became useful go-betweens as translators, experts, technicians and diplomats in Soviet-Turkish relations and Azerbaijani institutions – first of all the Central Committee of the Azerbaijani Communist Party, the republic ministry of Foreign Affairs and the cultural milieu – pushed in favor of closer relations with Turkey. Turkish academicians, writers, and journalists with leftist sympathies were often invited to Azerbaijan to write about the achievements of communism.

Influence among the Azeri diaspora in Turkey, estimated in the mid-1970s at 500,000 by Soviet diplomats, was a priority in Baku, with projects to create a society for relations with compatriots abroad (Vətən) and connections with so-called progressive organizations in Ankara and Istanbul, in an effort to thwart the anti-Soviet commitment of Azeri émigrés in a series of Cold War institutions. The diversity of Azeri identities and networks in the Soviet-Turkish-Iranian triangle made such attempts to gain influence in the borderlands appealing (3).

The three documents presented – originally from the Azerbaijan Republic State Archive (ARDA), collection of the ministry of Foreign Affairs (fond 28, opis’ 11, delo 9) – present another aspect of Soviet cultural diplomacy, embodied by growing contacts with nationalist and religious institutions. The documents themselves constitute a routine form of report to Moscow, whereby Soviet diplomats summarized meetings and discussions they had had with Turkish public figures. Their novelty, however, resides in three dimensions.

First, these documents were not found in the central archives of the Soviet – now Russian – ministry of Foreign Affairs, but in peripheral archives, as part of an exchange of information. The mention of copies made of the report at the end of each document reveals that reports were frequently sent to the republics, as a way to associate them in foreign policy-making. Central Committees and State institutions of the republics demonstrated a heightened interest in international affairs and were eager to get such information. The three reports reproduced mention « Azerbaijan » and « Uzbekistan » as the two republics to which copies were dispatched in this case.

This is related to the second originality of the reports which concern Soviet relations with three Turkish religious and cultural actors: Lütfi İkiz, head of the Türk Ocağı, Hasan Hüsnü Erdem, head of the religious administration (Diyanet) and Hafiz Zekai Sarsılmaz, imam of the Hacı Bayram mosque in Ankara. Islam was now part of Soviet public diplomacy abroad and Azerbaijan and Uzbekistan played a key role in that perspective, as the seat of the two most important Muslim religious administrations in the USSR (Baku and Tashkent). In later years, the importance of the Baku muftiate would grow, especially after the invasion of Afghanistan, with the attempt to demonstrate the respect accorded to Islam in the Soviet Union with participation in key public events such as the Izmir Fair (4).

The third dimension is the identity of the author, a diplomat who belonged to a special contingent of Soviet embassies abroad. In countries where some republics had a particular interest, due to common borders (Romania for Moldova) or ethnic bonds (Ukraine in Canada, due to the diaspora, or Armenia in Iran, in connection to the important Armenian community in the country), diplomats coming from the republics could be specially attached to the embassy as secretaries in the chancery, cultural attachés or consular agents. These diplomats were used for their cultural and linguistic features as part of an ‘’ethnic’’ diplomacy, of which R. Mamedov is an example, as head of the consular section of the embassy. Quite often, these diplomats were supposed to retain links to the KGB of their home republic, although this was never publicly acknowledged.

The three reports thus illustrate the transformations of Soviet diplomacy and quest for influence in Turkey, and their content demonstrates a willingness to engage religious and cultural issues that were previously excluded from official contacts. 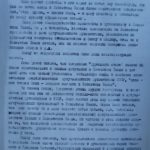 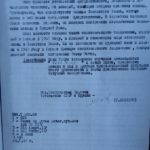 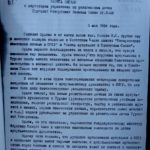 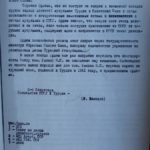 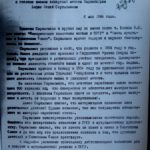 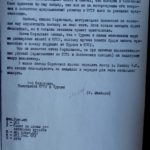