Soviet-Turkish tension during the Cold War contributed to a widely held view that the default nature of the two states’ relationship was chronically hostile and inherently destabilizing. In the context of the previous centuries of struggle, there is a certain logic to the portrayal of the interwar friendship between Ankara and Moscow as a short-lived pragmatic alignment in an otherwise conflict-prone affair that resumed after World War II. Before the Soviet and—much more recently—Turkish archives became accessible, the scholars who approached Soviet-Turkish relations during the interwar period treated their political meaning in terms defined narrowly by geopolitics—a pragmatic alignment at odds with the broader visions of each government. As a corollary to this belief, many accounts still maintain that cordial Soviet-Turkish relations ended, rather predictably, at the Montreux Convention of 1936, when an age-old geopolitical dispute over the ownership and control of the Straits reemerged and drove a wedge between two natural enemies.

Yet such notions of historic enmity exist more in the works of scholars than in the words of historical actors. Scores of Turkish diplomatic records, which are currently being declassified, show that the Soviet-Turkish partnership remained intact after Montreux but not after the Molotov-Ribbentrop Pact. The question then remains: if Soviet-Turkish convergence during the interwar period was only a temporary geopolitical alignment, then how could Moscow and Ankara disagree over the principal strategic challenge—the Straits—and continue to talk about joint anti-imperialist endeavors? Juxtaposing key holdings from Russia’s and Turkey’s foreign ministry archives, the second of which is not yet officially open to researchers, this article probes diplomatic exchanges between Ankara and Moscow during 1936–39 to examine how Turkish and Soviet leaders imagined they could reconcile their strategic problems. It shows that after Montreux there was even a thin ray of hope for a bilateral military pact on the Black Sea that would “ward off imperialist penetration.” Ultimately, more significant cooperation was achieved in the economic sphere. These activities demonstrate that a Black Sea logic was central to Turkish thinking, that Mustafa Kemal Atatürk’s and İsmet İnönü’s insistence on friendship with the Soviet Union as the primary goal of their foreign policy needs to be taken seriously. The Soviet Union, in turn, courted Turkey as an ally, including after Montreux. Continued cooperation after 1936 shows that, much more than a pragmatic alignment, Moscow and Ankara saw partnership on the Black Sea as a key response to imperialist threats from without. 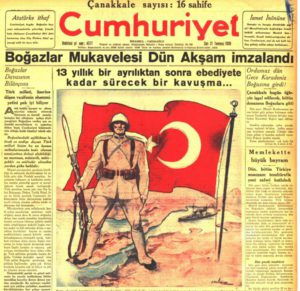